Our Trip started on Tue, June 19th – Mike drove ten hours during the night straight to the double tree hotel in Bloomington, MN. We had  a few stops along the way. Logan had to go potty and would wake up screaming when he had to go. Brayden did pretty well with the drive but I think tiering on his body. We did and early check in at the hotel (5am) wednesday morning. Wed, June 20th – 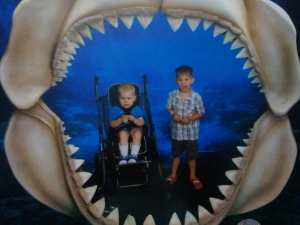 we went to the mall of America to the Sea Life Aquarium! Logan and Brayden loved every part of it. They got to see a pool of stingrays, a dark hall of jellyfish and walk a long tunnel under the shark tank! They even got their pictures taken with large shark jaws!  After the aquarium we walked the first floor of the mall. We went in the Lego store, and the disney store, but I think one of the unique places was the Rainforest Cafe. Logan could not get over the mist.  It would thunder and lightning and the foe apes would react.

It was soooo much fun. Logan would tell our waitress that were in the jungle 🙂 We then came back to the hotel and after the boys napped we all went swimming! They had a great time and a fun filled first day in Minnesota. Thur, June 21st – we registered for the conference and started to see slot of familure faces. The children’s program volunteers recognized the boys right away, and were so happy to see them.  then we went to the mall again. We were planning a day at nickelodeon universe. After we went and got our passes the boys wanted to ride the rides. The first one was blue’s clues adventure. Brayden had to ride in the blue car, not the pink one. (magenta blue’s friend) The other rides were the carousel, ferris wheel, (Mike was scared at the top) and the gost town. We got to meet the avatar, sponge bob, and uniqua (one of the backyardagan’s. We did see Jimmy neutron, and Dora but they were ways away.

Logan and mike went on a few extra rides and we were surprised how well he did with heights. We did get to go in a few shops on the second floor and went back to the hotel for the boys to nap. That night we set off to the Meet and Greet for the SMA Conference. The theme was carnival, game and cotton candy, balloons and ice cream. We had a blast meeting new families and seeing so many that are going through similar life experiences that we are. We were exhausted and ready for bed!

Fri, June 22nd – we woke up for the conference breakfast, signed the kids up for the children’s program, and were off to the general meeting. The kids got to have so much fun, playing playdough and racing cars, watching movies, and getting their faces painted.

In the general meeting we were excited to kick the day off with more understanding of the workshops that are being offered and where the drug programs are at for a cure. Their are three in clinical trials right now and about ten others that are in the beginning and middle stages. Statistics of a drug passing clinical trials and getting approved by the FDA is 10%. Yup nine out of 10 of these programs won’t make it past the FDA. But we do have hope! Two of the programs are receiving funding from $700,000 each. The more funding the faster it is to get the drugs to clinical trials. Our first workshop was the Type II talk it out. The other workshop that day was good nutrition. (If you would like a detailed copy of my notes let me know)

That night we went to the SMA dance. So many had a blast. Logan and Brayden preferred to dance by the table. We rocked the night away with them and so many other families. What a great DJ and the volunteers as well as researchers. I wish there was more time to chat with everyone!

Sat, June 23rd – The general session was filled with a panel of adult SMAers. They talked about going to college and starting life on there own. What an inspiration they are with masters degrees and very impressive skills. To many to list. Our next workshop was breathing basics. I also went to a toy adaptation workshop. Let’s just say that plastic toys are not fun to take apart and put back together. I did it, and soldered on the plug for the micro switch to be attached. Their were many other sessions that we would have loved to gone to had time permitted.

We did get a chance to visit the Permobil vendor. Brayden got a chance to test drive the wheelchair we are planing on ordering for him. He did so good on it I hope that he does that well at our next visit to mary free bed. Logan got to test a chair at the same time. He did extremely well and encouraged Brayden to do better. (proud parent moment) That night we took the kids out and explored a nearby city that had shopping and went to a play land for the kids.   Sun, June 24th – The closing general session was about drug research and findings. Big announcement on where next years conference is……Disney Land! This was the last day of the children’s program. The boys each received a stuffed animal, and Brayden got to take a quilt home made by a volunteer.

We left right away to hop on the highway, we stopped at the Dells. What a tourist trap that is. Haha. We went downtown and got some Wisconsin fudge and cheese. Made our way through looking at the water parks. We checked into our hotel which yes had it’s own water park. We had a great time on the lazy river and I reminded myself why I don’t go down the tunnels. I get dizzy. Anyway, the boys had a great time and now we are on the road to get home. How I miss home.

Gallery | This entry was posted in Uncategorized. Bookmark the permalink.